ISTANBUL, Turkey – According to figures presented by the Turkish bicycle industry association BISED, the country’s industry was able to increase its overall bike export by 58 percent in 2018. Despite the current growing political struggle between Turkey and the European Union; the country relies heavily on its EU export. But bike sales on its domestic market is growing thanks to a campaign supported by the EU to get Turkey cycling.

Turkey exported approximately 280,000 bicycles in 2018: a 58 percent gain on the 2017 total. Also, in the first half of 2019 Turkish bike exports continued to rise; by 34 percent for exports that went to the European Union.

All important: export to EU

By far, the biggest part of the country’s bike export goes to Europe. The EU and Turkey have been linked by a Customs Union agreement since 1995 and Turkey has been a candidate country to join the EU since 1999 and is a member of the Euro-Mediterranean Partnership. The Customs Union with the EU and free-trade agreements provide duty-free access for many of Turkey's most important products and trading partners. Also, for bicycles and bike parts, Turkey has duty-free access to the EU markets.

The European Union is by far the biggest export market, but disputes are mounting

Most of the bikes that are exported by Turkish makers are going to Germany, France, Italy, the Netherlands and Spain. These bicycles are of entry- to medium-level standards which is underlined by the unit average value of the exported bikes, 121 euro. The total value of the 280,000 exported bikes (2018 total) amounted to 34.05 million euro.

Most of Turkey’s bicycle exports are going to Germany, France, Italy, the Netherlands and Spain

Accell Bisiklet was responsible for 67 percent of the country's total 2018 bicycle export. Industry association BISED data makes clear that the value of Accell Group’s Turkish export stood at about 23 million euro which relates to an average value per exported bike of 122.60 euro. Another Turkish maker and exporter is Korel Elektronik Sanayi ve Ticaret. In addition to complete bikes, this company is also a volume-maker of alloy bike and e-bike frames.

In the first half of 2019, Turkey-based manufacturers have been able to expand their export further. Although not by the big percentage as in 2018; but the increase in export to the EU markets was sizeable at 34 percent, making a total of 174,000 units.

What’s most noteworthy during that period – and for the first time – is that the export of e-bikes is becoming noteworthy. In the first half of 2019 5,350 electric bicycles were exported: more than five times the number of the previous half year. Value-wise the increase must be even bigger; but exact data on that is not available. 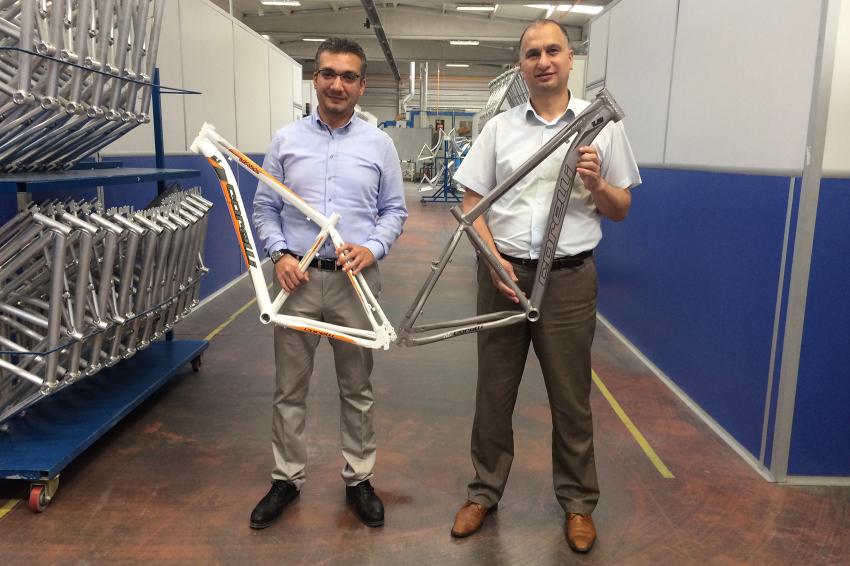 Last year a “Get Turkey Cycling" advertising campaign, funded by the EU, ran in the country. It was based on the fact that in various Turkish cities more cycle lanes have been constructed. The is now for a total of 1,048 kilometer of cycle paths available in 17 cities throughout the country. The campaign was of course aimed at boosting the use of bicycles in urban areas.

With the anti-dumping measures on e-bikes as well as regular bicycles imported from China that have been put in place by the EU last year, the European Union is also helping the industry in Turkey. It provides the country a big competitive edge compared to others as Turkey has duty-free access to the EU markets.

In 2018, Accell Bisiklet was responsible for 67 percent of Turkey’s bicycle exports

Opportunities for Turkey to strengthen position

At last September’s Eurobike show BISED Managing Director Esat Emanet underlined that the anti-dumping measures offered Turkey and the Eastern European countries the opportunity to strengthen their position on the EU bike markets. He said “We want to turn Turkey into an important production site for the EU. For that foreign investors will be attracted to Turkey and the necessary investments will be made.”

But to successfully turn Turkey into a production site aiming at exports to the EU, there are some risk factors that must be considered. Like the declining value of the Turkish lira; the unstable political situation in the country as well as the fact that “The country is moving further and further away from the European community's values,” as was stated in a May 2019 European Commission report. It also said that due to that “Turkey has little chance of joining the European Union.” If that will have consequences for the country’s duty-free access to the EU markets, this remains to be seen.