Since its market introduction, fat bikes have been favoured by the Finnish people as a new, exhilarating winter sport. - Photo Bookmundi

HELSINKI, Finland – In line with the trend as in most other European countries, e-bike sales in Finland increased in 2019. Although the number of units is still relatively small, the total market volume increased spectacularly to 23,000 e-bikes last year. Just like in other European market, the growing e-bike sales sparks the business.

Compared with other European countries the e-bike sales volume in Finland is still small. However, the volume of e-bikes sold almost doubled for the second consecutive year. In 2019 sales increase by 92 percent to 23,000 units, representing approximately 15 percent in value of the Finnish market. In previous years the volume already doubled from 6,000 in 2017 to 12,000 units in 2018.

More and more retailers are interested in selling e-bikes and carry an attractive range to appeal to the customers. No doubt the e-MTBs have refreshed the image of e-bikes and the wider offering in models and price ranges serves a broader clientele. The e-bike market volume could even have been bigger as some brands could not deliver as planned during the season due to relocations of production or shortage of parts and components.

Although the market enjoys a growing popularity of e-bikes, the total sales volume of e-bikes and bicycles combined declined last year. According to the latest estimates by industry insiders some 255,000 units were distributed in 2019 compared to 285,000 in 2018. Due to the climate conditions most bikes in Finland are sold between March and June. The import data of Finnish customs shows the same trend. Between January and October 2019 import dropped by 9 percent compared with the same period in 2018.

Nevertheless, cycling enjoys great popularity in Finland. The use of short-term city bike rental systems is widespread, and more and more cities start offering this service. The latest hype is the e-miniscooter, mainly used by young people in the larger cities. Both rental bikes and e-miniscooters serve the need for mobility, while this required to own a bike in the past.

In Finland the medium-priced bike with hub gears is still the most important model for commuting but has given room to the sportier and technically advanced models. These are also the more expensive ranges. The mountain bike is an important category of the Finnish market. In addition to sports and leisure it is also used for commuting. The wide range of MTB models on offer covers everyone’s needs. As Finland still has a lot of unpaved roads, in combination with the snowy winter conditions, cyclocross and gravel bikes enjoy a huge popularity.

For exercising a growing number of people use a mountain bike instead of a road bike as its sales volume is declining. Finland has great conditions for exercising thanks to dense network of forest roads and trails without the risk of running into a car or a truck. Since its market introduction the fat bikes have been favoured by the Finnish people. The big monster with five-inch tires floats easily on soft forest trails and has created a new, exhilarating winter sport. The fat bike is used in skiing resorts on snow mobile tracks and even off-piste on hard packed snow. The riders can reach places on their fat bike never visited before. 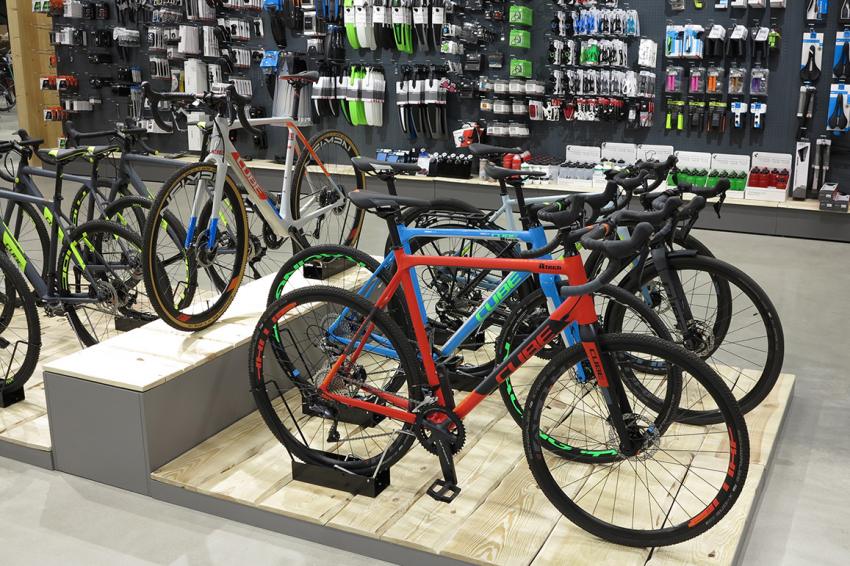 The more demanding customers who supports the professional bicycle shops, are also the drivers for the e-bike business. – Photo Heikki Kuva

Leisure and everyday mobility made cycling more popular in Finland it the past few years. There is reason to doubt this trend will continue for the coming sales season. The climate discussions, traffic jams and the prevention of inactivity are just a few arguments for more people to start cycling. Therefore, the bicycle trade value is expected to increase in 2020 like it did last year.

The inventory levels at retailers are relatively low and they can start the season with the latest models. The in-take of e-bikes is higher than last year which secures an increase of retailer’s turnover. The sales of regular bicycles is expected to bring at least an even turnover like in 2019, while a better model mix will result in higher average prices.

Though the business is growing, the competition in Finland is fierce on all levels of the distribution chain. Hypermarkets and DIY stores have gained a strong position in the lower priced city-bike category. They distribute these bikes only two to three months a year supported by extensive marketing campaigns. This strategy resulted in a loss of business for many small bicycle retailers. Many of them have gone through difficult years and had to close their premises. Meanwhile, the more demanding high quality and technical oriented consumers favour professional bicycle retailers. These customers prefer a wider selection of models and value the professional service. However, also these enthusiasts follow the international trend and turn to international internet stores.