PARIS, France – The French market has recorded a new increase in bicycle sales in 2019 according to the French Bicycles Observatory published by the Union Sport & Cycle. Last year, the market reached a total of 2.329 billion euro, an increase of 10 percent. Bicycle sales represented 1.502 billion euro (+12.6 percent) for 2,652,099 units (- 2 percent), including 388,100 e-bikes. The P&A segment also increased with a turnover of 827 million euro (+ 5.9 percent). Thanks to the augmentation of the e-bike market, the average price is still growing at 566 euro compared to 493 euro in 2018. 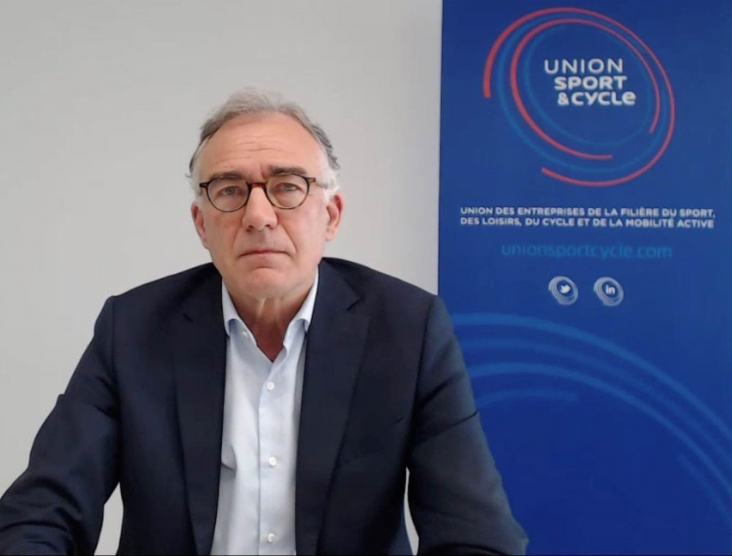 Jérôme Valentin, president of the Union Sport & Cycle and CEO at Cycleurope, explained during a videoconference recently, that the French bike market development follows the same trends as in countries like Germany or the Netherlands. “Last year, the total volume was down while e-bike sales expanded. It’s not surprising because other countries with a strong cycling culture are also seeing this phenomenon of volume withdrawals on conventional bikes in favour of e-bikes,” he said.

The French market is currently driven by e-bike sales. In 2019, this category has, again, recorded a huge increase of 12 percent. According to the French Bicycles Observatory no less than 388,100 e-bikes were sold last year representing 15 percent of the total bikes sales. In turnover, this category has generated 679 million euro representing 45 percent of the total bicycle market. Regarding the average price, the trend is clearly positive with 1,749 euro (+ 9.8 percent). “French people are buying better quality bikes with more and more options. It’s a very encouraging development,” commented Jérôme Valentin.

The e-sport segments show the way

The biggest increase was generated in the e-sport segment. Last year 87,000 e-MTB and 8,000 e-road bikes have been sold which means that the market in volume increased by 37 percent. The e-MTB and e-road bike combined now have a market share in volume of 22 percent. Last year e-road bike sales performed 100 percent higher compared to 2018 and its average price has grown 7 percent, to more than 3,000 euro.

For the moment, the mobility bikes are still the most important product category in volume even if the increase of 9 percent is less impressive than for the sport segment. According to the French Bicycles Observatory a total of 199,000 e-city and 91,000 e-trekking bikes were sold for 74 percent market shares. The rest is made up of the other segments with around 4,000 units. Jérôme Valentin explained that e-cargo bikes are part of this category but for the moment the study doesn’t give the details. One thing is obvious, this category is the one with the most expensive bikes as the average price comes close to 4,000 euro.

In the future, the e-bikes segment are expected to continue to grow very quickly. According to Union Sport & Cycle, the market could reach 1 million units in 2025, with a turnover close to 2 billion euro.

The French IBDs still hold a dominant position in the distribution of e-bikes. Last year, they sold 56 percent of the 388,100 e-bikes, or 217,000 units. Behind them, the big chains like Decathlon, Go Sport, Intersport and Sport 2000 sold 32 percent of the e-bikes (around 124,000 units). But, the big chains are gaining market share from the IBDs. In 2018, the big chains still hold a market share of only 23 percent. Online sales now represent only 3 percent of e-bike sales with around 4,000 units. Some other chains like the car accessory specialists Norauto or Feu Vert and the supermarkets are losing their part of the e-bike business year after year. In 2019, they only had 9 percent market share (35,000 units) against 18 percent in 2018.

In terms of value, the difference between independent retailers and chain stores is even more important. In 2019, the retailers accounted for 74 percent of the e-bike market, representing more than 500 million euro. An increase of 20 percent compared with 2018. However, the big chain stores are pushing, seeing their market shares increase by 20 percent last year. In turnover, it means a 67 percent increase at 135.8 million euro.

The French market is currently driven by e-bike sales

The P&A activity is shared in all the networks

In the P&A market, the business is more and more important with a total turnover of 827 million euro. But unlike the bike market, the sales are more equally distributed across all the chains and distribution channels. Last year, online sales recorded the most significant increase in terms of market shares with a 12 percent growth. Websites are now representing 28 percent of the market or 231.5 million euro.

Chain stores like Decathlon account for 37 percent of the segment with a turnover of 306 million euro. On the side of independent retailers, sales have not progressed from last year at 264.5 million euro. They still hold a market share of 32 percent.

Difficult prospects for 2020   “Due to Covid-19, 2020 will be very difficult for all the retailers and the industry,” said Jérôme Valentin during the presentation. “The Union Sport & Cycle has conducted a study with bike shops. Questions have been sent to 2,400 retailers and about 400 answered. The results show that the impact of Covid-19 is of course very negative on the activity, knowing that the stores were forced to close in March, April and until beginning of May. According to the interviewed retailers, 42 percent turn-over losses are estimated for the first quarter. In value, French retailers have lost 170 million euro. Even when the crisis is over, it will be very difficult for retailers to make up for this lost turnover. The study is also explaining that 63 percent of the interviewed companies have used partial unemployment to secure their activity. Moreover, 78 percent asked for a time limit for payment to the French Government and 64 percent of them have also negotiated with their suppliers.”

However, Jérôme Valentin wants to end up on a positive note. “If consumers want to buy bikes after the confinement, the stores would be ready because they have some stocks. Manufacturers can meet strong demand as the supply chains and assembling lines are now re-established. The e-bike and bicycle can and must play a major role after the crisis both in terms of ecology and respecting social distancing."