PURMEREND, the Netherlands – Booming e-bike sales in combination with the implementation of the ‘close to market production’ business philosophy bring major changes to the market. More and more e-bikes are now being assembled close to the market in Europe. Investments are made to grow the European production quickly and it brings the topic of ‘European bike valleys’ back in the headlines. A lot of e-bike brands are having a difficult time to secure their supply chain and find production in Europe. For many of them production in Asia is no longer cost efficient. “We see new assemblers entering the European market while nearly all existing factories are now busy changing their production lines from bicycles to e-bikes,” explain Maarten and Wouter van Doornik, general managers and owners of Holland Mechanics.

Are companies preparing for an ongoing growth of the European e-bike market and do you see additional investments in production capacity?

The trend of investing in more capacity to handle the e-bike market expansion has been going on for some time already. However we now see that nearly all e-bike and bicycle assemblers in Europe anticipate on a growing demand. Some are only planning but many are now really busy to increase their e-bike production volume and transform their assembly lines from bicycles manufacturing to e-bikes.

The e-bike and bicycle industry has seen the implementation of two major trade regulations last year: the European anti-dumping duties on ‘made in China’ e-bikes and the Trumps tariffs. Are these trade regulations the main reason for the production relocations or is it the e-bike market expectation that drives companies to bring their production to Europe?

The political uncertainty on what is going to happen on the short and medium range term has also increased as a result of the US-China trade war. The geopolitical situation is of major impact on the bicycle industry due to the long distance supply chain. Trumps’ unpredictability as well as the EU’s decision to levy anti-dumping duties made a lot of people realize the advantages of producing closing to the market. After all, this gives you maximum control over your business and makes you less dependent on politically driven decisions to adjust regulations. The implementation of the anti-dumping duty made people start to recalculate their budgets. Many of them realized that production in Europe is hardly more expensive than in Asia, especially for e-bikes, which need a high level of quality control. Quality management is always a big issue when production is moved from one supplier to another or to a new location. Again, this is a bigger issue in case of e-bikes compared to regular bicycles. To get a stable quality of your final product you need to avoid production relocations as much as possible. When brands are looking for a new production location out of China to another Asian country they take into considering that they have to move again in a few years’ time. We see that a lot them now decide to move to Europe to limit all uncertainties as much as possible. Even suppliers for the US market consider assembly Europe instead going to another location in Asia. Also for them a stable quality in combination with a highly efficient industry in Europe is of decisive importance when calculating their budgets. 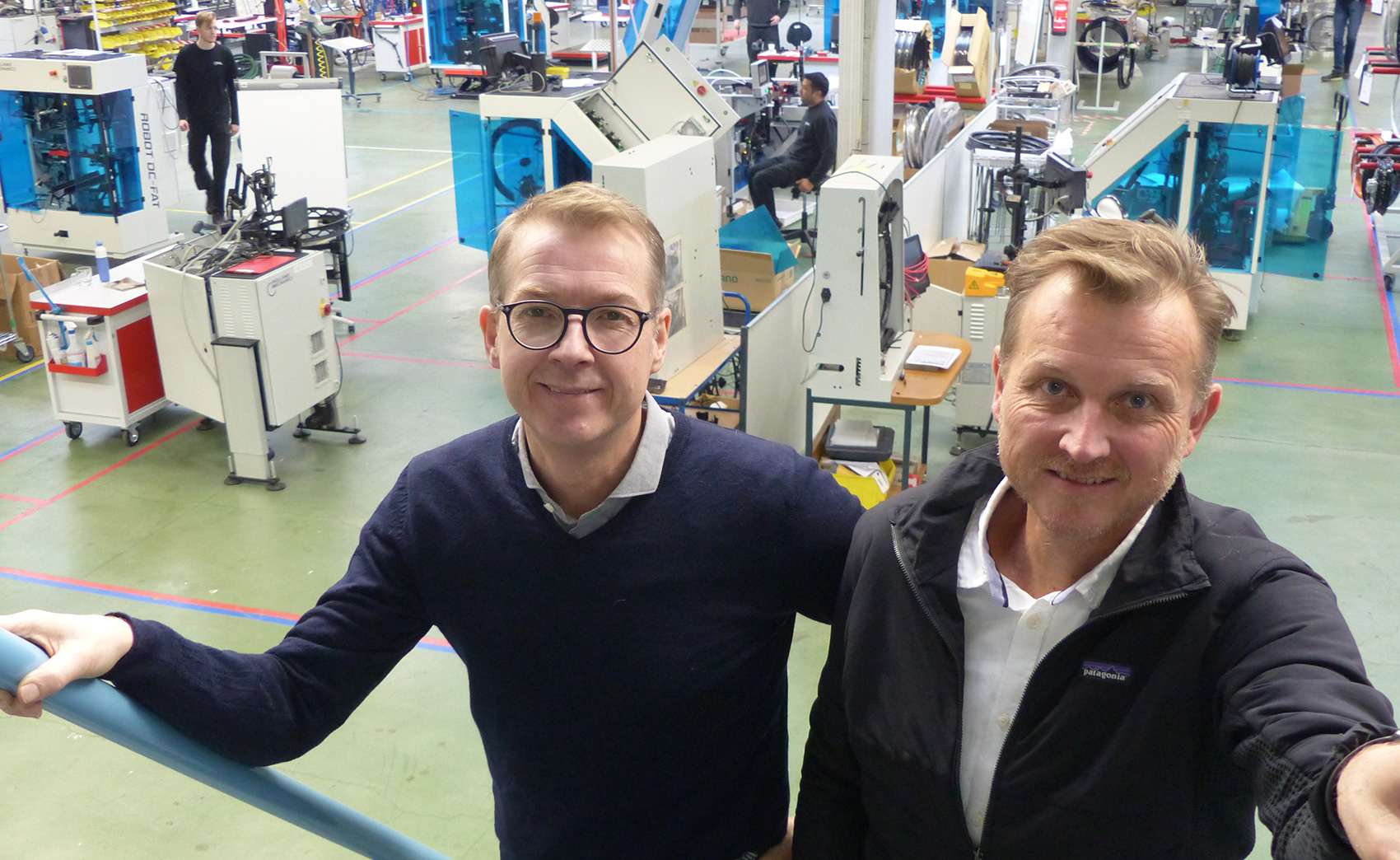 “For a stable quality of your final product you need to avoid production relocations as much as possible,” said Wouter (l.) and Maarten van Doornik of Holland Mechanics. – Photo Bike Europe

Production relocation from China to Europe is one of the options for assemblers who are looking for new locations. But what are the most attractive countries in Asia at the moment for the relocation of production out of China? Is it Vietnam or do you see more activities in other countries?

At the moment Bangladesh and Sri Lanka are holding the biggest potential for investment by the bicycle industry. India might become very interesting in the future as well, but that will take some years. The implementation of a safety standard recently by India’s national government will certainly improve the quality of the ‘made in India’ bicycles and help to create the right conditions to increase the export in the future. We also don’t see much new developments in Indonesia and Thailand. The same goes for the free trade agreement between the EU and Vietnam. Regarding bicycle production for the European market the EU-Vietnam FTA does not play an important role as far as new investments in the bicycle industry are concerned. Of course you can see a relocation of production from China to Vietnam, but that only causes moderate growth in volume. The e-bike is the perfect storm for the Asian companies. This product category brings in much higher revenues compared with regular bicycles. This applies not only in Europe, but also in Asia. Therefore more and more Taiwanese but also Chinese companies open subsidiaries in Europe to benefit from the e-bike boom.

Speaking about Eastern Europe; there is a lot of activity in this region with new companies establishing factories in Romania, Bulgaria, Hungary and Poland while existing ones increasing their capacity. Do you think the e-bike production and component industry will eventually concentrate in one of those countries? Where do you expect the creation of a Bike Valley as in Portugal?

The existing factories are now busy changing their production lines from bicycles to e-bikes, However an e-bike takes at least 25 percent more time to assemble so if you want to keep up your production volumes, substantial investments in capacity and logistics are necessary. New companies are being established in all those countries in Eastern Europe and they select diverse locations for different reasons. We don’t see the added value of a ‘Bike Valley’ concept. Except for rim and wheel building lines the production of parts and accessories close to bicycle factories don’t bring a lot of advantages. Bicycle parts are so easy to transport that you don’t need to establish new factories in the vicinity of bicycle assemblers.

Is the production capacity for e-bikes in Europe growing by tens of percent in line with the market development?

The European industry is focusing on e-bikes. First and foremost we see investments in the transformation from bicycle to e-bike assembly and not particularly in the total number is units. Those who have arranged their e-bike production the most efficiently can reach a flow time of 90 seconds. But you can’t reach that without substantial investments in the production, including the robotization of some processes. Companies do anticipate on an increase in production volume in future as well but focus on efficiency first. Even the brands who only sourced their e-bikes so far are now considering to start assembling these themselves. The volumes have become too big to have everything built by one subcontractor so they have to subdivide their orders among a range of assemblers. As a result they lose flexibility and it makes quality control more complex. For them the best option is to open a factory themselves.

Operating factories in the Netherlands and China, Holland Mechanics has been one of the leading suppliers of wheel building machinery for decades. Their machinery can be found in bicycle factories all over the world. The acquisition of bicycle production machinery supplier Marchetti last year gave Holland Mechanics an even stronger foothold in the industry. “Except for the paint shop and logistic systems we can now provide turn-key bicycle factories anywhere in the world,” said Wouter and Maarten van Doornik. 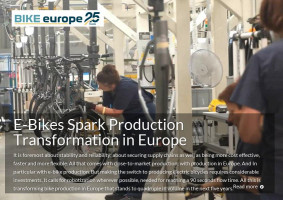 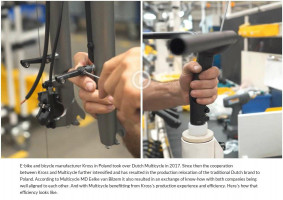 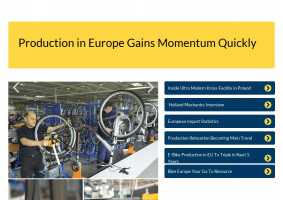 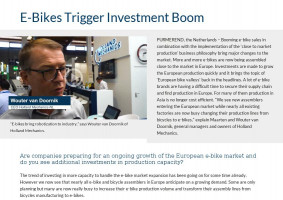 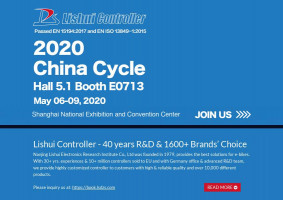 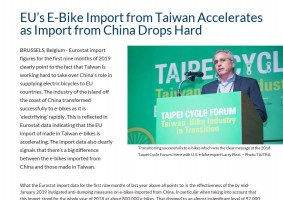 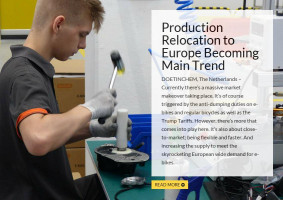 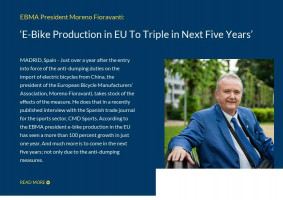 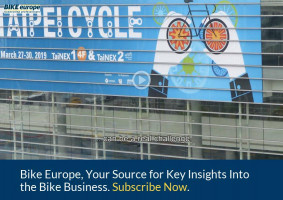